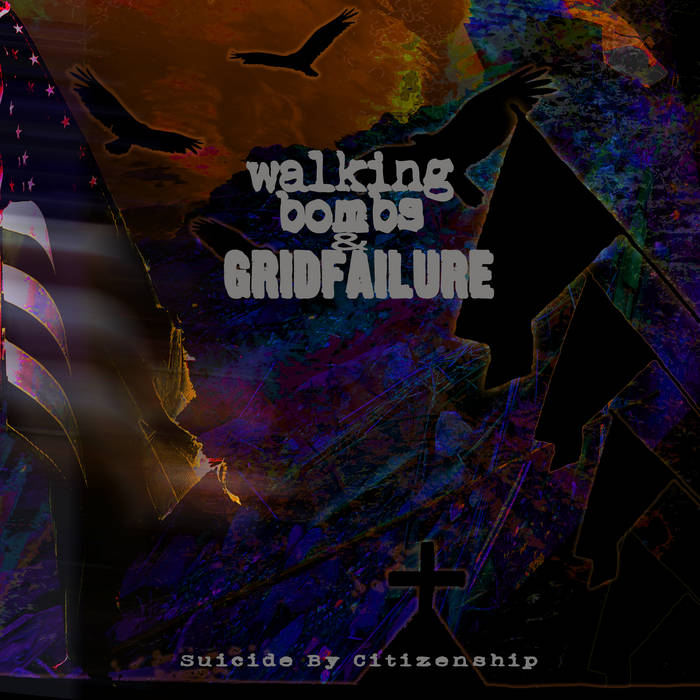 Suicide By Citizenship, a fully collaborative album by New York-based solo outfits/collaborator magnets WALKING BOMBS and GRIDFAILURE, is an album conceived to challenge its own creators with the intent of combining sounds from two outfits located on polar opposite ends of the spectrum of underground music. The album blends a wealth of genres into a powerful alloy of improvised jams, rife with discontent for the contemporary state of American politics and more specifically the current administration’s actions and policies.

WALKING BOMBS is the brainchild of one Morgan Y. Evans, formerly of Divest, Antidote 8. Located in Northeastern New York in the Woodstock area, the outfit has been in existence for nearly a decade, created by Evans as a solo or collaborative outlet for his music while between full-time bands. It eventually became his main musical focus and has yielded multiple albums and an EP, including past-collabs with artists ranging from VOWWS to Shining (Nor) to Spirit Adrift members and many more. A cross-genre project which melds 90s alternative groove, folk anthems, raging antipunk, industrial and bits of everything in between, the act propagates socio-political change, advocating for free thought and equal rights. The spirit of classic Americana singer-songwriters fueled with an energetic punk pulse is centered around Evans’ penetrating, melodic vocals.

Located further down the Hudson near New York City, GRIDFAILURE is the conduit of one David Brenner, formerly of Dead By Dawn, Heidnik, Theologian, and more. Since forming in 2016, the project has released an avalanche of albums and other releases, each infusing varied instrumentation, blending dark ambient, horror score, dark hardcore, harsh noise, jazz, world music, and other elements into an unpredictable and confrontational dose of unhinged experimentation. With subject matter focusing on disillusionment and revenge amidst societal collapse and an environment in crisis, the outfit’s wrath instills paranoia and disseminates hopelessness

In 2016, Evans invited Brenner to collaborate on WALKING BOMBS’ “Demagogue” single, an outspoken punk anthem aimed at our 45th president, to which GRIDFAILURE provided a backdrop of chaos and vocals. The unlikely pairing of acts on the track quickly became something both wanted to explore further, penning ideas for a fully collaborative release. They met in late 2017 at Bohemosphere Studios in Saugerties, New York, with studio owner and Evans’ musical counterpart, Jay Andersen (Surmiser). The three tore through several improv jams and that afternoon had a solid structure of what would become Suicide By Citizenship. In addition to several subsequent sessions at Bohemoshpere over the next few months, with Brenner, Evans, and Andersen each contributing multiple instruments, additional material was recorded and manipulated by Brenner at The Compound, and a wide cast of additional collaborators sent in contributions from around the country, including Thomas Andrew Doyle (TAD, Brothers Of The Sonic Cloth), Laura Pleasants (Kylesa, The Discussion), Mike Score (All Out War, Below The Frost), Brett Netson (Built To Spill, Earth, Snakes), Elizabeth Le Fey (Globelamp), BJ Allen (Full Scale Riot), Benjamin Levitt (Megalophobe), and more.

WALKING BOMBS and GRIDFAILURE coalesce their own singular styles into an unclassifiable and diverse modern take on Americana on Suicide By Citizenship. Invoking the outspoken nature of folk and punk icons into a surreal socio-political album where both acts step a bit outside of their already varied approaches with eight songs that speak from the everyday sidelines of our country in turmoil. Delivering brutally honest and heartfelt anguish into a set of anthems, Suicide By Citizenship is an attempt at capturing a snapshot of these demoralizing times, and a statement of detestation to the oppressive and corrupt presidential agenda and state of reversal in which our civil rights seem to be, while environmental collapse and worldwide war at hand, from a surrealistic hometown perspective.