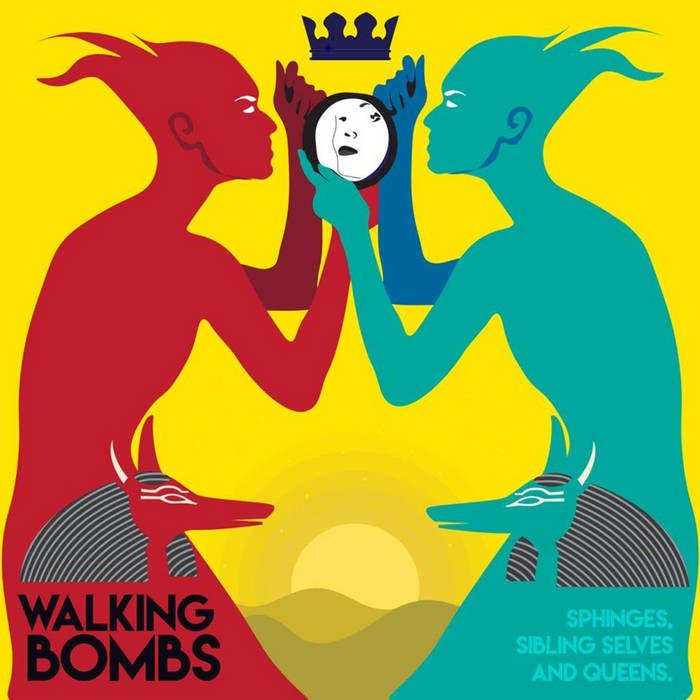 Sphinges, Sibling Selves and Queens is an album about the riddle of identity in the modern world, the fight for authenticity and the horrors of an empathy free online culture, society and planet. It is about self exploration as liberation, being multi gender and about defeating partial pictures that lead to often willfully badly drawn conclusions.

"This album means a lot to me and is very personal," says Morgan Y. Evans aka Walking Bombs. "Not only do I have longtime guests like Dava She Wolf, Nate Kelley, Jay Andersen and Alison Babalon on it who I have known decades, but other amazing people as well. Kentro is my cousin, Globelamp is my partner and the other guests are all more recent friends from different areas of my life whom I am thrilled participated. I was really able to purge a lot of compartmentalized stuff about navigating feeling comfortable being non binary and the perception of others. Julie Catona, my good friend, captured this so incredibly in her nuanced and evocative cover artwork."

'There’s an incredibly poignant sense that pops up multiple times in the lyrics in various incarnations centering on an expression featured closer to the beginning, when Morgan sings with strikingly smooth heavy vocals about an aim “to remind you that you’re alive.” You might not have even known you needed such a reminder before hitting play here, but the refreshing, cohesive, and ultimately quite powerful musical weirdness on the album drives the reminder. Lyrically, the album packs a range from embracing nonbinary gender identity to anger at those tone policing or outright perpetrating violence against those who dare to stick out — and it all lands powerfully.' - CapturedHowls.com

Dave Brenner (Gridfailure): sound manipulation and vocal looping on "A Little Too High"; all music on "A Distant Howling".

Kentro: all music on "Fallback".

This album is dedicated to Chuck Mosley, Bobby Delicious, Morgan Spinedi, and Matt Robb (RIP to them all).